Central Park
Eight hundred acres of green space in the middle of Manhattan sounds like a fable. And yet, that’s exactly what Central Park is, which is why you’ll find joggers, nature lovers and bikers getting their fix of greenery every day. In the winter, visitors can lace up their skates for a twirl at Wollman Rink, while summer favorites include the Central Park Zoo and the Friedsam Memorial Carousel.

For lazier days, catch some rays with the sunbathers in Sheep Meadow or on the Great Lawn — and if you stay after the sun goes down, you may be serenaded by one of the many live performances that occur here, including some by The Metropolitan Opera and the New York Philharmonic. There’s no better place in the city to escape the city, making Central Park an oasis amongst the chaos right outside. (212-360-3456)

Chelsea Market
Chelsea Market is a little bit of everything packing into a seriously awesome space. Though the higher floors hold offices (and lucky office workers), the ground level is part farmer’s market/food hall, part shopping destination. From places like Anthropologie and Bowery Kitchen Supply (where you can snag cheap wares without trekking all the way to Bowery), to Buddakan and Chelsea Wine Vault, it’s true that there actually is something here for everyone. 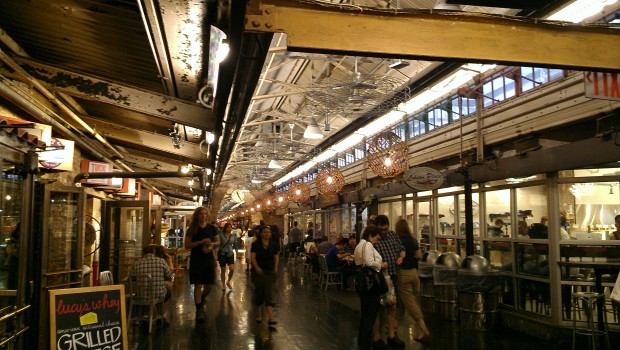 The space also holds events on a regular basis, so you could stumble upon everything from a Rag & Bone sample sale to a Birchbox pop-up. Rain or shine, Chelsea Market should be bookmarked in your travel plans as a must-visit, even if you only stop in for lunch. (212-652-2110)

Grand Central Terminal
Said to be “Manhattan’s only remaining great gateway,” Grand Central Terminal (not “station” as it is often mistakenly called) is a magnificent example of art meeting functionality. The Beaux Arts facade that stretches along 42nd Street features a beautiful clock and crowning statues of Minerva, Mercury and Hercules. Inside the terminal, a vast blue ceiling twinkles with fiber optic lighting depicting the zodiac constellations, while one level below, sixty railroad tracks transport over 500,000 commuters a day.