Are you planning a trip to New York City?  While your visiting New York there are plenty of things to do and sights to see. Many people come to New York City to see the world famous churches. Here are the top 5 must-see churches in New York City.

St. Patrick’s Cathedral in Midtown Manhattan is perhaps the most well-known church in all of New York, or North America for that matter. The Neo Gothic cathedral rivals the likes of Paris’ Notre Dame Cathedral in its gothic grandeur and standing within the city’s architectural lexicon. St. Patrick’s is the head of the New York Catholic church, acting as the seat of the archbishop of the Roman Catholic Archdiocese of New York, and the structure plays a vital role as both a symbol of Catholic New York (particularly Irish Catholic) and as an active place of worship. Today’s church has become a bona-fide tourist attraction for both its location across from Rockefeller Center and its remarkable architecture.

One of the most indelible images of downtown Manhattan in the days following the attacks of September 11th was that of the dust covered St. Paul’s Chapel standing defiantly in what was once the shadow of the World Trade Center. The quaint chapel, located literally steps from the footprint of the towers survived the attack remarkably unscathed. Images of the chapel quickly gained recognition around the world as a symbol of fortitude and strength during the city’s greatest tragedy. The church’s role in 9/11 tells only a small fraction of the chapel’s history, one dating all the way back to 1766.

The Riverside Church stands like a beacon at the northern end of Manhattan island. In a city filled with skyscraping buildings the Gothic masterpiece still manages to stand tall. In fact, the Riverside Church is the tallest church in the entire United States and is currently the 26th tallest in the world. More than just a large structure, the Riverside Church has acted as a longtime sanctuary and celebratory hall for generations of Harlemites. Indeed, the church is known as much for its activism and community involvement as it is for its towering steeple. 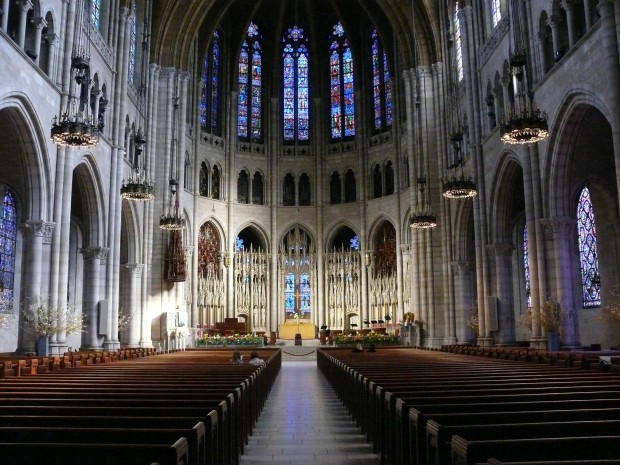 As mass immigration flooded New York towards the turn of the 20th century,the Cathedral of St. John the Divine was started in 1892 with the idea that it would become a house of prayer for all nations. The consequent construction of the church was halted by two World Wars, numerous design alterations and more recently a large fire that closed the building for several years. Still, the Cathedral of St. John the Divine remains one of New York’s finest religious structures, despite the small fact that the building officially remains unfinished more than a century from when it was started.

Located at the intersection of Wall Street and Broadway in the Financial District,Trinity Church has been at the heart of a changing New York for centuries. The old pillar of the rapidly changing neighborhood represents a Downtown New York that no longer exists, one in which this district was not only the financial hub of the city, but also the communal and spiritual center of New York.