One of the best places to find a bargain is at Portobello Road Market in Notting Hill. Filled with over 2,000 stalls, this huge market sells everything, including second-hand clothes, antiques and books. On Sundays, Petticoat Lane Market in Spitalfields is the place to buy clothes, and other big street markets can be found at Camden Lock and Brick Lane.

The prettiest market in London is the Columbia Road Flower Market. This is held in Tower Hamlets every Sunday, when the streets are filled with stalls of colourful flowers and plants. Book-lovers should head for the Southbank Book Market, under Waterloo Bridge.

Most markets include stalls that sell food and produce, but some London markets specialise in this. Borough Market in Bankside is the oldest food market in London, where producers from around the country display their wares under its wrought-iron arches. Other popular food markets are Venn Street Market, held on Clapham Common every Saturday, and Leadenhall Market in the City of London. Days out in London for lovers of both food and history should include a visit to Fortnum & Mason. This historic Mayfair department store, founded in 1707, specialises in food from around the world and has had many Royal Warrants; earning it the nickname of ‘the Queen’s grocer.’

For those looking for things to do that are under cover, London has some great indoor shopping centres. The largest ones are Westfield London and Westfield Stratford City. Westfield London is located at White City in Shepherd’s Bush and has about 255 stores and a 14-screen cinema. Westfield Stratford City, the third largest shopping centre in Britain, lies near the London Olympic Park in Stratford. As well as shopping in over 300 stores, it has lots to do on days out in London.

The huge site contains 70 restaurants, a 17-screen cinema, bowling alley and two hotels. Other shopping centres worth a visit include Whiteleys, a converted department store in Bayswater, One New Change in the City of London and Cardinal Place, in Victoria. There are several interesting arcades in London, which are the precursors of modern shopping centres. Burlington Arcade, near Bond Street and Piccadilly, has many fascinating old shops and is patrolled by top-hatted beadles in traditional uniform. 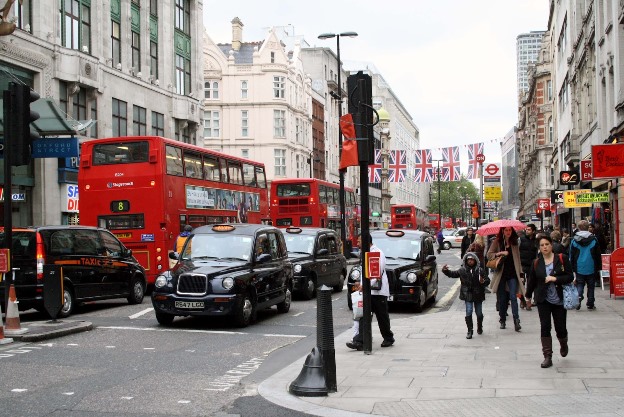 Some of the oldest and most famous stores in the world can be visited when shopping in London. Selfridges has stood on Oxford Street since 1909 and is famous for its eye-catching window displays. It stocks practically everything, but specialises in fashion, with several floors devoted to designer clothes and famous labels. Another fashionable department store is Harvey Nichols, affectionately known as ‘Harvey Nicks’. This has eight floors devoted to fashion, dining and lifestyle. A visit to Harrods is on most visitors’ list of things to do in London.

This Knightsbridge institution is the largest department store in Europe, with over 330 departments selling everything a shopper could desire, along with 20 restaurants, Egyptian statues, a spa and a wonderful, decorated food hall. Also housed in a historic building, Liberty, on Regent Street, has a distinctive, Tudor-style exterior with leaded windows and black timbers. It specialises in fashion, fabrics and luxury goods, and is famous for the decorative Liberty prints it first produced in the late nineteenth century.

Harrods is one of the world’s most famous stores and one of London’s tourist attractions thanks to the wide assortment of luxury goods that are on display in a magnificently decorated building.

The enormous array of products is particularly impressive. The company’s motto – engraved on the building’s pediment – is Omnia, Omnibus, Ubique (Everything, for everyone, everywhere). Harrods used to be known as the store where anything you could think of was for sale. While this may not be the case any more, the assortment is still enormous. You can purchase anything from historic 18th century dinner plates or giant teddy bears to exquisite caviar.

It is best to take your time for a visit to the large store, which covers an area of about 80,000 sq m spread out over seven floors. Floor plans are available near the entrances.

One of the most beautiful departments of the store is the magnificent Food Hall on the lower floor, decorated with tiles created by artist Williams James Neatby. Other impressive departments include the Egyptian Halls and the Crystal Rooms. Also of note is the central escalator, decorated with Egyptian motives. And don’t forget to visit the toy department – the city’s best – where you’ll find enormous stuffed animals.