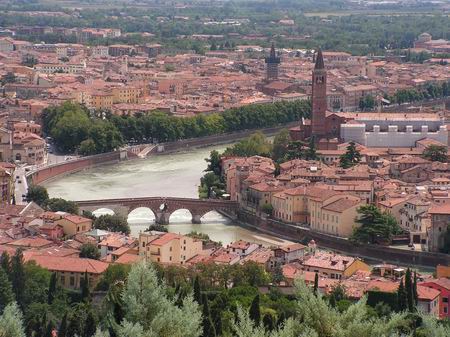 With a little luck you’ll avoid tourist traps, and come back home with the feeling that you have truly visited Italy. This article examines tourist attractions in the Shakespearean town of Verona, a UNESCO World Heritage Site. Be sure to read our companion articles on northern Veneto, southern Veneto, and the university city of Padua.

Verona boasts many vestiges from Roman times. Its Roman amphitheater is the third largest in Italy and its interior is virtually intact. This edifice hosts fairs, theater, opera and other public events, especially summers. The Roman arch bridge crossing the Adige River was partially destroyed in World War II and rebuilt using original materials.

The Twelfth Century Romanesque Basilica of San Zeno Maggiore sits on a Fourth Century shrine to the city’s patron saint, St. Zeno. Its splendid one hundred ten foot bell tower was mentioned in Dante’s Divine Comedy. The vaulted crypt contains the tomb of St. Zeno and tombs of several other saints.

Verona’s largest church is the Fifteenth Century Sant’Anastasia whose interior is an excellent example of Gothic architecture. Items of honor include frescoes and hunchback statues dispensing holy water. The Fourteenth Century Castelvecchio on the banks of the Adige River probably sits on the site of a Roman fortress. Its art museum specializes in Venetian painters and sculptors. Verona’s squares include the Roman Herb Square that still maintains its medieval look and some produce stalls. The Gentlemen’s Square is Verona’s center of activities. Next door is the Scaglieri Palace, once home to the ruling family.