This island’s arid tropical climate and rugged terrain historically made it unsuitable for agricultural purposes. While other French West Indies islands saw early growth and development of plantations this one knew mostly poverty and hard times. Since the early 1970’s, however, it has come into its own. It is now a popular tourist destination and second home for the wealthy, who enjoy its beauty and the quiet privacy and solitude St Barts offers.

Christopher Columbus named this place for his brother Barthelemay in 1496. It is part of the Leeward Islands and is located about 160 miles (250 km) East of Puerto Rico in the Northeast Caribbean. Neighboring islands include St. Martin, Antigua, and St Kitts.

This volcanic island with an area of 8 square miles (21 sq km)st is surrounded by pristine beaches and coral reefs. Its highest elevation is 938 feet (286 m). Temperatures stay in the 72 to 86 degree (22 – 30 C) year around. December through May are the dry season with June through November being more humid. 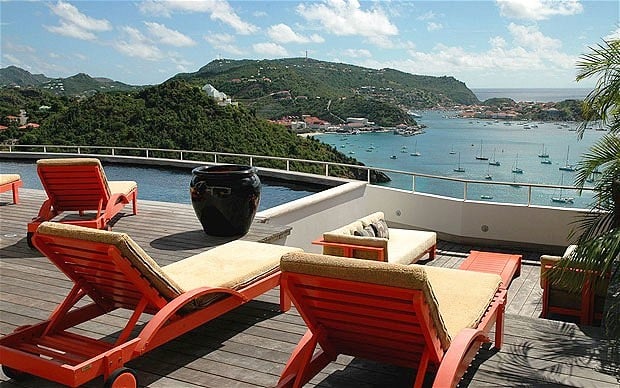 Native peoples colonized the island a couple times but had difficulty sustaining themselves agriculturally. It became a French colony in 1648. It experienced prosperity after it was transferred to Sweden in 1784 and became a duty free port. The Swedes were responsible for much of the original development and gave the capital Gustavia its name. In 1852 much of that development was destroyed by earthquake, and later fire. In 1878 the island was sold back to France.

While the official language is French, English is also spoken most everywhere, especially the hotels and restaurants. The 8,800 inhabitants are mostly European descendants of original settlers and newer settlers from North America.

About 200,000 tourists visit each year, with about 70,000 of those staying in one of the 25 small hotels or 400 rental villas, and the remaining 130,000 being passengers on luxury boats. The natural harbor at Gustavia, and the surrounding waters are a yacht haven. Scuba diving, wind surfing, and surfing are popular activities. Duty free, upscale retail makes shopping a fun and money saving experience.

More than 70 restaurants feature West Indian, Creole, Italian, and Asian cuisine. Entertainment includes music of various Caribbean varieties. Private tours, poolside massages at your villa, and yoga instruction are all available. There are twenty-two public beaches. The warm coastal waters stay at a temperature range of 68 to 74 degrees (20 – 23 degrees C).

The winter holiday season sees the most tourism. Discounts of up to 50% are available from April 16th to December 14th. There is a 5% tourism tax, so make sure it is included in your bill and won’t be added on later. No need to worry about pollution and traffic gridlock here, there only two gas stations. Crime is pretty much nonexistent. The harbor is not deep enough to attract large cruise ships and their crowds.

More than 400 St Barts villas of all styles and sizes can be rented for that quiet family tropical vacation or romantic getaway. These lodgings are located both directly on the beach and in the hills above where they provide spectacular vistas. If you enjoy your experience as much as most people you will want to return again and again, perhaps even purchase a home here.