Bermuda may be easy to get to — after all, this mid-Atlantic archipelago is a quick flight from most East Coast gateways — but getting around isn’t as easy as you might expect, especially if you were planning on driving yourself in a rented convertible. That’s right: Rental cars are not permitted on Bermuda, so if you’d like your own wheels you’ll have to settle for two on a rented scooter. Once you master driving on the left-hand side of the road you’ll be set; otherwise, Bermuda’s buses and ferries are reliable and cover most of the island. 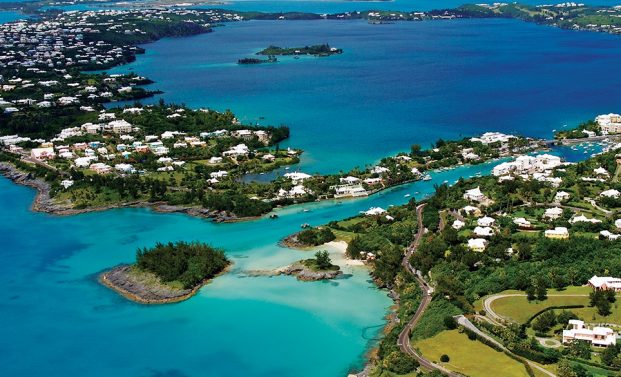 Flying to Bermuda couldn’t be easier. From East Coast gateways including Boston, New York, Philadelphia, Washington and Charlotte, Bermuda is a mere two hours away. Flying in from Toronto, Atlanta or Miami? Your flight time will be under three hours, which means that most East Coasters can hop on a morning flight and have their toes in the sand by lunchtime.

Even visitors from Europe don’t have to wait too long for a Dark ‘n’ Stormy since British Airways operates a daily nonstop flight from London Gatwick. Combine that with dozens of direct flights from the U.S. and Canada on carriers including American Airlines, Delta, JetBlue, United, Air Canada and WestJet, and you’ve got a recipe for relaxation. 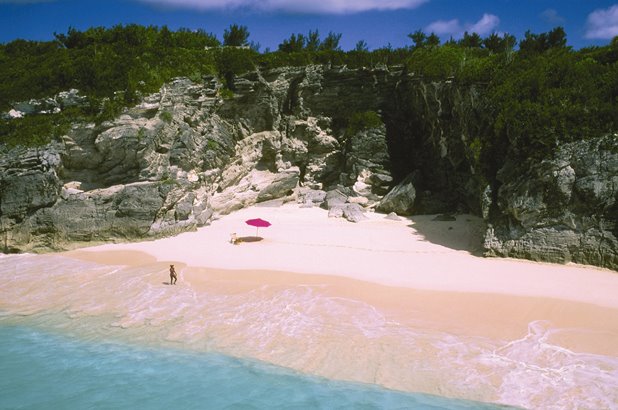 Visitors who are cruising to the island can expect the same ease of travel since Bermuda is home to three ports of call: King’s Wharf and Heritage Wharf, both of which are located in the Royal Naval Dockyard on the western tip of the island, and Hamilton Harbour, which is located in Bermuda’s capital, the city of Hamilton. Some 300,000 visitors cruise to Bermuda each year from ports in New York, Bayonne, Baltimore and Boston on major lines including Celebrity Cruises, Norwegian Cruise Line, Royal Caribbean, Holland America and more.

Because Bermuda is such a small island with limited natural resources, rental cars are not permitted in order to keep pollution and traffic to a minimum. Of course, there are plenty of alternative ways to get around, and most of them are part of the quirky charm that is traveling throughout Bermuda. The most common is renting a scooter — just don’t call it that, since all two-wheeled motorcycles are called bikes (bicycles are called pedal or push bikes).

Riders must be at least 18 years of age, wear a helmet and drive on the left-hand side of the road. Rental locations can be found across the island, but if you’d like to scoot off from your hotel, just ask; most cycle liveries, including Smatt’s, Oleander and Wheels, can provide delivery and pick-up service at your island accommodations. 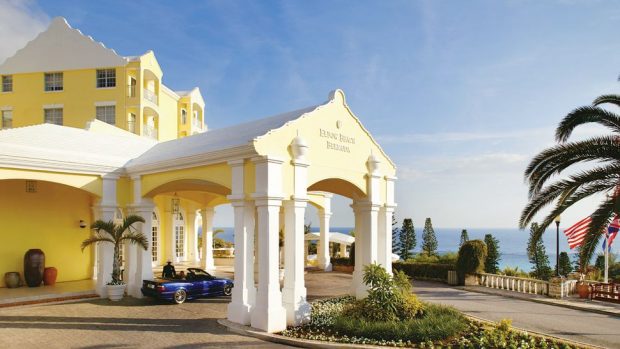 Prices for multi-day rentals vary from shop to shop, but you can expect to pay around $55 for 24 hours on a single standard scooter. If you’re traveling with a companion, consider renting a double scooter, which is about $10 – $20 more per day. Tip: The speed limit is 35 kph (approximately 22 mph), but if encroaching Bermuda drivers are eager to pass, simply pull over into one of the island’s many scenic “lay-by’s” to take in what will likely be a gorgeous ocean view.

Famous for its powdery pink sand, Bermuda is also well known for its pink public buses, which serve the entire island and are by far the most affordable way to get around. Most buses depart from the Central Terminal on Washington Street next to City Hall in Hamilton, but if you’d like to hop on a bus from points outside of the city, head to a main road and find the closest sidewalk bus stop. Many have limestone shelters, but others are simply blue or pink poles on the roadside (a blue pole is for rides out of Hamilton and a pink pole is for rides into the city). 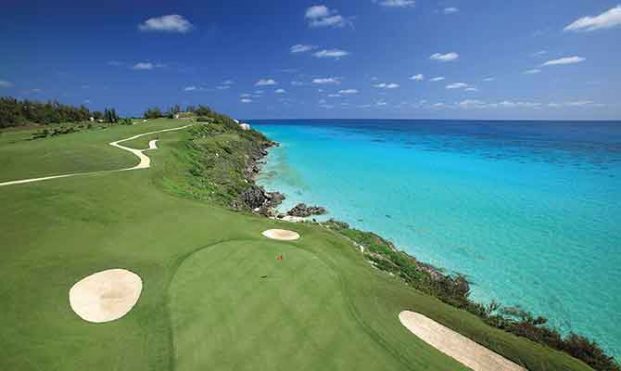 Bus tickets are sold at the main terminal in Hamilton and at island post offices, but if you’d prefer to pay upon entry, you must have exact change in coins (U.S. and Bermudian coins are accepted).

Tip: For a great view of Bermuda’s stunning south shore beaches, hop on the Number 7 bus, which follows South Shore Road and makes stops at the island’s most popular slices of sand, including Warwick Long Bay and Horseshoe Bay Beach. Also, avoid traveling during the busy morning and evening commuting hours when buses are packed with locals heading to and from work. 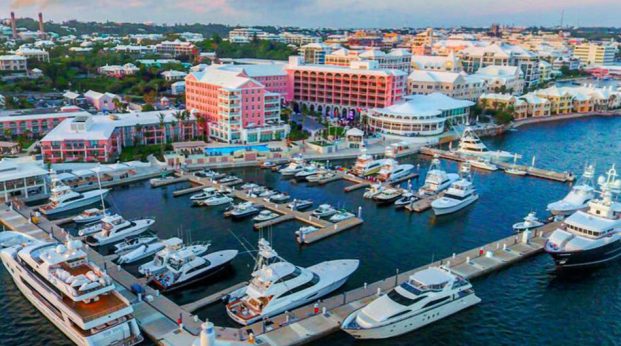 If you’re not into renting a scooter and you’ve missed the bus, then consider one of the most picturesque ways to get around the island: the public ferry, with four well-serviced routes that cover the island’s waterways from end to end. Options include the blue route, which pulls into the Royal Naval Dockyard, Watford Bridge and Cavello Bay in Sandys Parish; the pink route, which makes several stops in Paget and Warwick Parishes; the green route, which stops at Rockaway in Southampton Parish and Somerset Bridge in Sandys Parish; and the orange route, which operates in the summer and stops at the Royal Naval Dockyard before continuing on to the historic town of St. George, a UNESCO World Heritage Site for its well-preserved British colonial architecture.

All ferries depart from the Ferry Terminal on Front Street in Hamilton and cash is not accepted, so be sure to have a ticket, token or exact change in hand before you board (you can buy all public transportation tickets in post offices island-wide and at the main ferry and bus terminals in Hamilton). 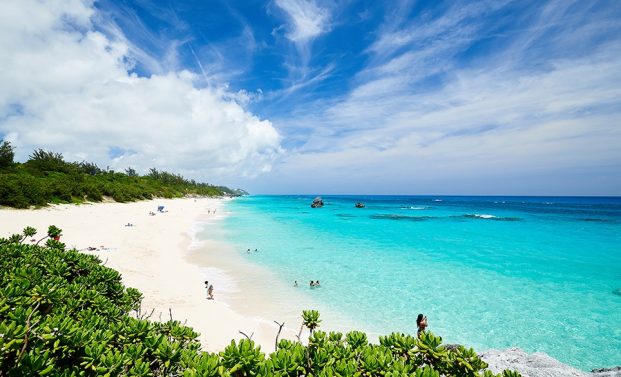 If you’d rather not fuss with exact change and also plan to ride the bus while on the island, consider buying a Transportation Pass, available for one, two, three, four or seven days; it’s good for unlimited use of Bermuda’s buses and ferries.

Taxis are widely available across the island, but they’re also the most expensive mode of transportation — it costs $6.40 just to open the door. All taxis are metered at government-set rates; U.S. dollars are accepted island-wide and pegged 1:1 with the Bermuda dollar. Rides can add up fast, so it’s important to know where you’re going or, at the very least, ask your driver how much he or she thinks it’ll cost before you drive off. 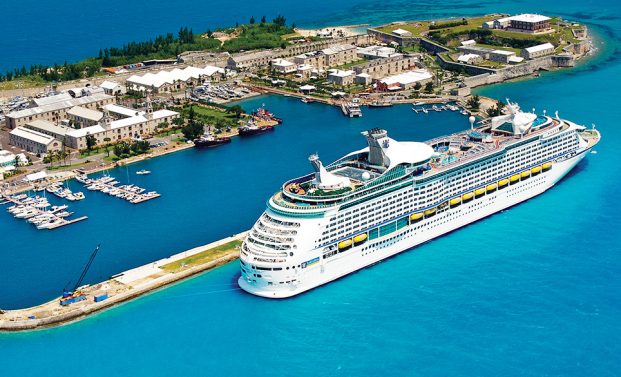 You’ll probably hop in a cab a few times during your stay, and your first and last rides will likely be to and from L.F. Wade International Airport, which is the most common way to arrive and depart the island. In general, taxis can usually be found outside large hotels, near the airport, or on the streets of the city of Hamilton, the town of St. George or the Royal Naval Dockyard. You can also hail one by simply raising your hand on the street.