La Rioja is a small region, located between the Basque Country and Castilla, gives its name to one of the most renowned Spanish wines in the world. For years when dining at a restaurant and wanting to accompany the meal with a fine wine patrons always ordered a bottle from Rioja gradually wines from other Spanish regions have gained prestige and popularity but Rioja wines, particularly reds are still synonymous with quality and nobility.

La Rioja is a region and also a wine producing area even though their limits do not coincide exactly. La Rioja as a geographic region includes not only a fertile valley where wines are cultivated but also a large mountainous area to the south and a vast agricultural expanse to the east, while La Rioja wine producing area expands a little further north entering Álava, one of the three Basque provinces. When traveling to La Rioja a visit to the winery of Elciego or the wonderful walled city of Laguardia are a must, both located in the Rioja Alavesa.

Rioja winemakers have invested in upgrading their facilities and some of the best known architects in the world have transformed the old wineries into works of art, as is the case of El Marqués de Riscal winery in the Rioja Alavesa a splendid building designed by none other than Frank Gehry. Several of these wineries have also added hotels and restaurants to their facilities giving way to a new wave of tourism, Enoturismo or wine tourism. The lively town of Haro is a good starting point for exploring some of the best wineries in the area and home to the famous Batalla de Vino (Battle of Wine) held every year in the summer time.

Along with the wines the Camino de Santiago or St. James way is also a major protagonist in this region; the route traverses the area in its entirety including the capital Logroño and two of its most interesting cities Nájera and Santo Domingo de la Calzada. In the latter there is a spectacular parador and a church with one of the highest and most beautiful baroque towers found in Spain. San Millán de la Cogolla is a place of great natural beauty with two monasteries the Suso, known as the one on the top, of Moorish architecture and the Yuso, known as the one below, from the XVI century which in some ways resembles the Monastery of El Escorial and houses the emilianenses glosses which contain the first words ever written in castellano or Castilian.

Not far from there, in the mountains, is Ezcaray a stunning town with some Basque flair, upbeat and lively, chosen by many riojanos and basque people as a summer vacation spot. Further up the mountain is the ski resort of Valdezcaray. The mountains of Ezcaray are populated by oak and beech and generous in the fall offering fans a large variety of mushrooms.

Fans of big game hunting (wild boar, roe deer and red deer) flock to Tierra de Cameros in the mountains that separate La Rioja from the province of Soria in Castilla y Leon, one of the most beautiful mountain landscapes and of the greatest ecological value of the entire peninsula. 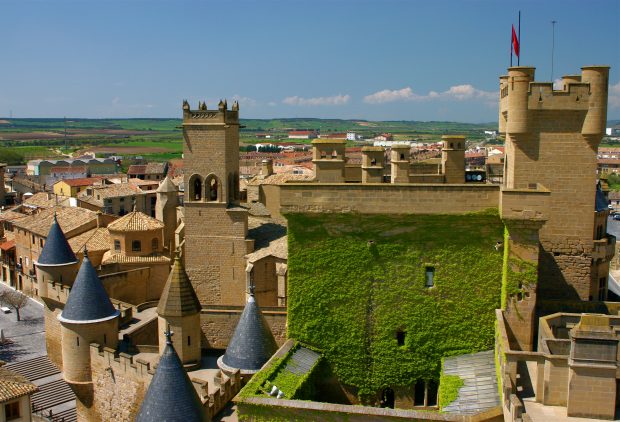 Traveling to this region is always a pleasure easily demonstrated while sitting at one of its magnificent restaurants, sipping a glass of Rioja and enjoying the cuisine which combines the excellence of its huertas(vegetable gardens) with delectable plates of lamb or pork. Some dishes of the region such as las patatas a la riojana with chorizo or stuffed peppers are a well know part of the popular Spanish food culture.

La Rioja is a small province but its fertile landscapes, world renowned wines and historical heritage present endless travel possibilities to its visitors.