Tulum, located 15 miles south of Akumal, was once called “Zama”, meaning “place of the dawning”. This breathtaking place which sits on a cliff facing the east Caribbean shoreline offers many Mayan ruins and ocean views for a day or short visit. It is generally accepted that Tulum was an major city in Mayan world between 1000 A.D. and 1600 A.D. Only the wealthy Mayans lived there, where the lovely views of the sea suggest the remains of an ancient country club. However, a 20-foot wall surrounds the city to keep invaders from both land and sea from entering Tulum.

This place was one of the first Mexican cities discovered by the Spanish Conquistadors, though the high walls dissuaded them from exploring it. At that time, Tulum was the only city still thriving when it was discovered.

It was the chief center of resistance during the 19th century War of the Castes, though later succumbed and signed a treaty with the Mexican government in 1935. In recent years, Tulum has become a major tourist attraction in the Mayan Riviera for those who like ancient architecture and craftsmanship.

The Temple of the Frescoes is well-known for housing multiple 13th century murals which picture ancient ceremonies highly regarded by the Mayans. One such mural depicts the Mayan goddess of fertility and medicine, Ixchel, which is extremely unusual. Outside, pieces of the stucco are still painted red; it is believed that at one time the entire city was encompassed in this same paint.

The Castillo Pyramid is known as a scenic place offering multiple breathtaking incoming sea invaders. The Temple of the Diving God boasts a figure above the main doorway which shows a man diving headfirst toward the earth. Two similar frescoes are found at Coba in the Grand Pyramid, and are believed to reference the planet Venus. The image may also be called “the bee god” or “the god descending”. 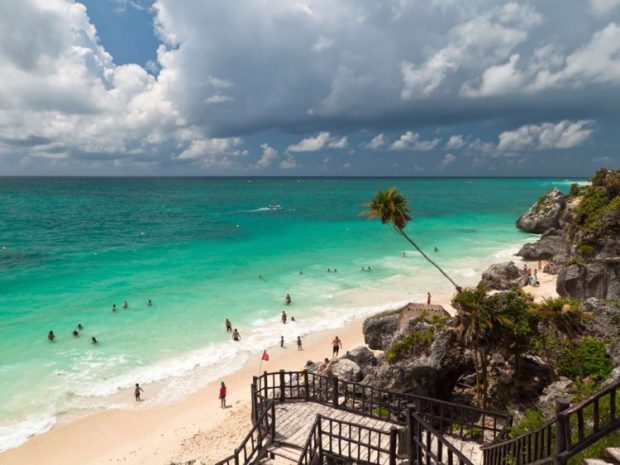 Tulum offers a unique view into the lifestyles and living spaces of the elite Mayan civilization members. Contrasted with the intricate carvings and superb architecture, the surrounding walls speak to the city’s resistance to influence from outsiders over several thousand years.