Shortly after moving to Seattle, I was riding the bus on Highway 99. I looked out the window to see the mountain standing impossibly tall, given its location nearly 90 miles from the city. I craned my neck until Mt. Rainier passed out of view. 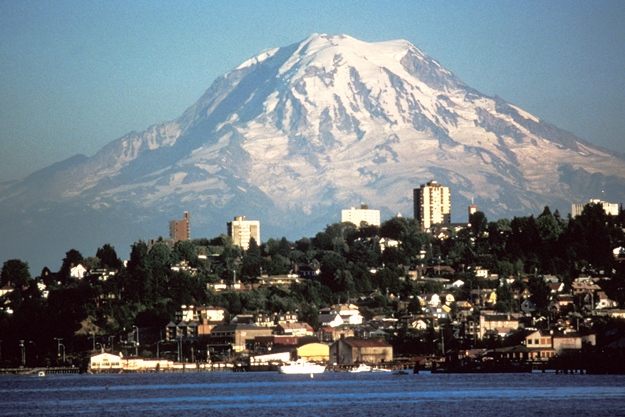 To this day, I still look at the mountain in awe. Probably because it never looks the same. One moment it might be partially obscured by clouds and the next it’s magically free from obstruction, glowing with orange light in the setting sun.

While I love Mt. Rainier from afar, I adore it even more up close. As a Seattleite, I have the glorious benefit of living within driving distance not only of Mt. Rainier National Park but also North Cascades and Olympic national parks. Living so close, I’ve had the distinct privilege of making dozens of trips to these parks. With so many trips under my hiking belt, I’ve learned a few ways to enjoy these unique parcels of outdoorsy goodness. Here are some of my tips.

Drive. There are a few entrances into the park. No matter which one you choose, you’ll find spectacular views. Most people driving from Seattle will enter from the southwest at the Nisqually entrance, near Ashford. Not all of the entrances are open year-round and not all of them allow access through the entire park, but usually you can drive from southwest to northeast. Whether you drive the entire park or only a portion of it, stop at the Paradise Jackson Visitor Center to take in the views and (in the spring) the wildflower meadows.

Hike. The number of hiking trails in Mt. Rainier is almost overwhelming, from easy walks to overnight trips such as the Wonderland Trail (a 93-mile path that encircles the mountain), there is something for quite literally every type of hiker. While you don’t need a permit for day-hikes, you’ll need one for anything requiring overnight wilderness camping. The park has been receiving record numbers of requests for permits in 2015, and many people have been denied due to the number of requests. This especially has been true for the Wonderland Trail—thanks to the popularity of the book and movie, “Wild.”

Stay. Within the park, there two sets of accommodations, the National Park Inn in Longmire and the Paradise Inn in Paradise, as well as four campgrounds. When I go, I stay just outside the park at a hotel, bed and breakfast, or cabin, and then drive into the park for day hikes. You need at least a day pass to enter the park, but consider purchasing an annual pass if you’ll be visiting more than once in a year, as it will pay for itself.

Drive. While this park might be considered the least convenient to visit (there are no roads that cross through the park), it’s arguably one of the most interesting because of its diverse ecosystems, including glacier-capped mountains, the Pacific coast, and a vast old-growth temperate rainforest. You also will find hot springs, trails that take you through groves of lichen-covered trees, and more rainfall than any other state except for Hawaii. From Seattle, the most common route into the park is by driving the north side of the Olympic Peninsula, via Port Angeles, and heading west to the Pacific Ocean. This is the route with access to the popular Hurricane Ridge and Sol Duc Hot Springs. If you have more time and can circle around the entire park, the dramatic Hoh and Quinault rainforests can be accessed from the west and southwest.

Hike. Hikes in Olympic are totally diverse; you can choose from mountainous trails (in the north) to coastal and rainforest walks (in the south and west). Though I’ve been through both rainforests and on a coastal walk and camping trip, my personal preference is to hike on the north side of the park around Hurricane Ridge. For me, there’s nothing like the views of the snow-capped mountains in this area. And in the winter, there’s killer snowshoeing here. For info on hiking with families in Olympic National Park see this post.

Viewfinder Tip: Check the NPS.gov website before any visit to a national park to make sure the roads are clear and the park is open.

Stay. Even though my preference for enjoying the Olympic is in the north, my favorite place to stay is Lake Quinault Lodge in the southwest. Built in 1926, the lodge has a certain rustic charm to it with antique fixtures and no WiFi in the rooms. If you’d like something even more rustic, the park has cabins as well as camping spots, mostly located in the northern and westernmost corners.

Drive. Some of the most beautiful motorcycle riding I’ve ever done has been on The Cascade Loop, a highway that goes through North Cascades National Park. I’ve seen seriously spectacular scenery along this route. I’m talking evergreen forests so green they seem like they’re out of a surreal movie scene. Of course the drive is just as beautiful by car, and probably a safer bet as this area gets a lot of rain throughout the year. Note that a portion of the road is usually closed from November to April due to avalanche danger.

View along the Cascade Loop Highway

Hike. The North Cascades National Park is kind of like a secret hiking haven for Seattleites in-the know. You’ll find far fewer visitors to this park than the other national parks in the state. As a result, trails are quieter than you might expect. There’s also a huge range of hiking options here. Climbers especially love the park becaust it’s home to some of the state’s most remote climbs. Officially, hiking season is year-round, but the best time for hitting the trails in the North Cascades is from April through October. You might still find snow at the higher elevations as late as August!

Stay. My preference always has been to stay outside the park where there are lots of options for accommodations. But there are five campgrounds in the park, some that accept reservations as far as a year in advance. Permits are required for back country camping. Plan accordingly!