Palazzo Avino (formerly Palazzo Sasso) is a stunning five-star deluxe hotel on Italy’s famed Amalfi Coast. Built in what was once a 12th century private villa for an Italian noble family and opened as a hotel in 1997, Palazzo Avino has been rated as one of the world’s finest hotels and boasts two-star Michelin dining.

Tucked away in the medieval hilltop village of Ravello and perched high on the cliffs, 350 m (1,000 ft) above the sparkling Mediterranean, Palazzo Avino overlooks some of the coast’s most picturesque fishing villages. Ravello is up away from the hustle and bustle of Positano and Amalfi which are besieged by day trippers and coach parties on a daily basis. Ravello is more gentile and civilised; cars are banned and you can spend hours meandering along various paths that lead to the Villa Cimbrone at the very tip of the village.

Palazzo Avino was built in the 12th century for a lucky nobleman and his family as their summer residence on the Amalfi Coast. Dramatically perched on the outskirts of Ravello with views swooping down to the harbours of Maiori and Minori, it is one of the great jewels of the Mediterranean.

Easily reached from Naples, without having to negotiate the Amalfi Coast road, even a couple of days in this magnificent hotel would do wonders for the soul.

All rooms and suites are decorated with hand made Vietri tiles, antique carpets, furniture from the 18th and 19th centuries and brass accessories and appliqués. Frette Linen and Bulgari amenities, satellite TV, safe, minibar, internet access and iPod docking stations are also available in each room.

Business travelers can use meeting room with natural light and separate access for up to 70 people. Palazzo Sasso can also accommodate small exclusive parties for lunch, such as weddings or other special events, up to a maximum of 70 people to ensure a truly unique experience.

Palazzo Sasso will attend to guest’s needs, such as limousine and helicopter service, boat trips, excursions, restaurant reservations, cooking classes, concert tickets and any other requirements.

The beach club boasts an excellent casual restaurant, beautifully appointed changing rooms, as well as relaxing living rooms within a private villa setting. The 32 rooms and 11 suites are defined by their antique furnishings and 21st century comforts, and if you go for one with the kind of panoramic Mediterranean views that take your breath away, you’ll understand exactly why Palazzo Avino gets such rave reviews. So a little change to now reflect the family name of Avino isn’t going to change a thing.

The hotel is situated on the highest part of Ravello, located in the South of Naples and perched on a clifftop 1000 feet above sea level overlooking the spectacular Mediterranean of the Amalfi Coast. 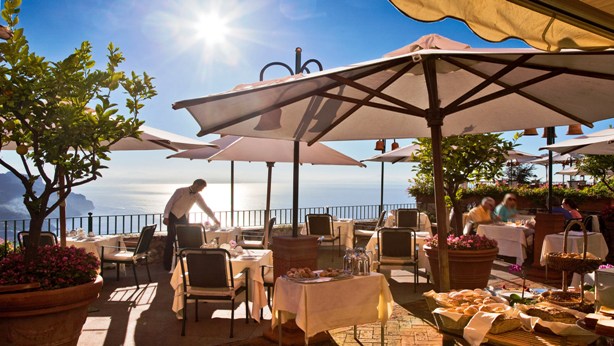