The Greenwich Hotel  is located in Tribeca one of New York City’s most under-the-radar neighborhoods, beloved by locals and plugged-in visitors who appreciate its proximity to SoHo, Greenwich Village and Wall Street, but love being away from the tourist troves. One of the area’s biggest spokespersons is Robert De Niro, who spearheaded the Greenwich Hotel, a bold statement of handcrafted design.

The work of numerous artisans from around the world is woven into the interiors, which feature such design details as leaded glass windows, exposed oak beams and antique wood floors. A mix of styles, from Tibet to Morocco, is featured in guest rooms, and some have working fireplaces. The hotel’s gorgeous library, leafy courtyard, spa and pool are open only to guests, making even first-time visitors feel like they are bona fide Tribeca residents. 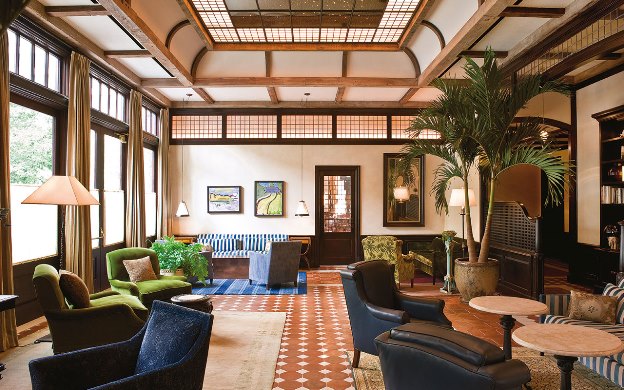 88 Rooms and Suites, of which no two are alike.

Furnishings draw from a wide range of cultural influences, from hand-loomed, Tibetan silk rugs to English leather settees. All beds are Duxiana from Sweden. Bathrooms are designed in unique patterns of hand laid Moroccan tile or Italian Carrara marble

The bustling corner restaurant has been welcoming New Yorkers and travelers morning, noon and night since 2009 with a warm and comfortable atmosphere, leisurely Italian spirit and heartfelt cooking.