The Bocas del Toro Archipelago is a group of islands located in the northwest part of Panama in the Laguna of Chirique. The archipelago is near the border with Costa Rica. It offers a perfect mixture of the Caribbean beauty with its nature and history with cultural traditions.

The archipelago consists of nine islands, 52 keys and 200 small islets. Among these islands, the largest and the most developed is the Colon Island. The estimated population of the Bocas del Toro Archipelago is approximately 9000 people. There are plenty of hotels, restaurants, flairs for eco tourism and other adventures. It also boasts its white sand beaches its Caribbean side.

The island offers its locales and tourists loads of attractions, with good rain forests with lots of flora and fauna, white sand beaches, crystal clear waters, Indian villages and the national marine park. The national marine park is in charge or protecting the ecosystem and national resources within the boundaries of the Bocas del Toro archipelago. It also adds interest to visitors because of its Caribbean architecture, the local cuisine and dishes and their festivities.

The Panama’s weather is pretty warm while in Bocas del Toro, temperatures differ depending on the location or region. It has a tropical climate with temperatures ranging from 70 to 90 degrees Fahrenheit. The archipelago experiences low humidity with light temperature nights.

The rainy season in Bocas is experienced from December to January and again on June to August, but this season is not enough to ruin anyone’s vacation. The dry season is during February to May. 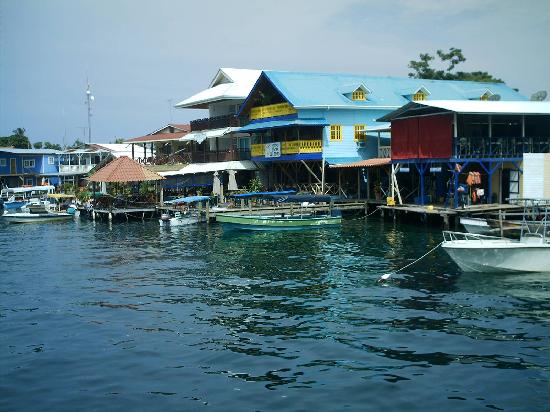 The Bastimentos Islamd is located 10 minutes away from the town of Bocas del Toro. Bastimentos, a small town and is the center of activity in the island has a Caribbean architecture and has no roads.

The Careening Cay is located a few hundred meters from the Colon Island. The island got its name from careening, which means to incline a ship on one side for cleaning or repairing.

The Colon Island is the northern most and the main archipelago in the island. This is one of Panama’s main tourist’s destinations which also have a strong boating community.

The Cristobal Island is in the southern part of Colon and is mostly deforested. The famous destination in this island is Dolphin bay, where the dolphins usually are the main attraction to locales and tourists.

The Solarte Island is located between the Columbus and Bastimentos islands. It is also one of the smaller islands of the archipelago. The famous and the most visited place here is the Hospital Point. This island is also famous for its diving and scuba diving sites.