Paris, the city of romance elicits exotic and beautiful dreams of relaxation and culture in those who love to travel. And for those who do travel, Paris has many beautiful sights to offer to beguile the traveler into staying…and staying just a while longer than planned.

Of course, one of the foremost sights in Paris is the Eiffel Tower. Established in 1889 by Gustave Eiffel for the Universal Exposition, it was intended to be a “temporary” structure for that event. However, it was never taken down and now stands as a popular attraction in Paris. 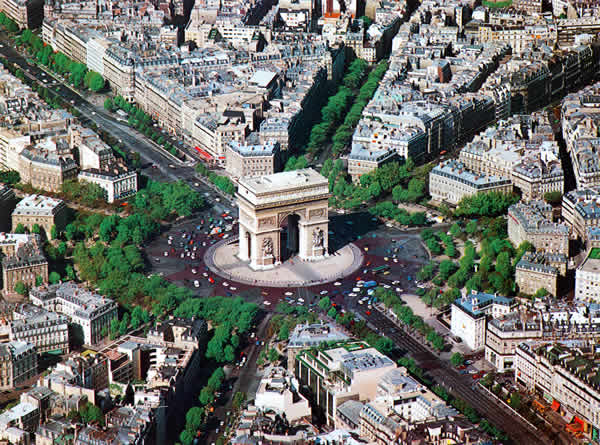 The Napoleonic Arc de Triomphe stands in the centre of the Place Charles de Gaulle. It was commissioned in 1810 and the monument to those who fought for France particularly during the Napoleonic Wars was finished under King Louis-Philippe between 1833 and 36.

Notre Dame de Paris is a beautiful cathedral built in the Gothic architectural style. In French, Notre Dame means “Our Lady” and it has been through several restorations and alterations due to damages and upgrades through the years.

The Louvre is one of the most famous art museums in the world. For France, the Louvre is also a historical monument as well as a national symbol. Construction began in 1190 and before becoming an art museum, it was a fortress, a prison, and then a residence. It houses over 35,000 pieces of art, including the Mona Lisa and the Venus di Milo, in 650,000 square feet of space.

For those interested in the military history of France, the Les Invalides in Paris is a museum and monument that contains, tells and shows the history of military action in France.

On a small man-made island in the middle of the Seine River, the Lle des Cygnes, stands a small-scale copy of the Statue of Liberty. This replica was placed on the island three years after the Statute of Liberty was placed in New York commemorating the centennial of the French Revolution.

Another beautiful church in Paris is the La Sainte-Chapelle. It is also a Gothic chapel that has also suffered much at the hands of revolutions in France. It has also been restored and has been a historic monument since 1862.

Along the Seine River just outside the Louvre is the Tuileries Garden. The Palais des Tuileries formerly stood in this place until 1871 when it was destroyed. These formal gardens cover 63 acres and are laid out according to a plan designed by Andre Le Notre in 1664.

One of the newer attractions in Paris is the Disneyland Resort Paris. Built in 1992, there are two theme parks as well as several hotels and entertainment venues in the complex. It has quickly become one of Europe’s leading tourist attractions with over 14.5 million visitors in 2007.

Concorde Square was designed by Jacques-Ange Gabriel in 1763. From Concorde Square, you can see the Louvre, the Tuileries Gardens, and the Arc de Triomphe straight down the Champs-Elysees. This decorated, historically important area is a great place to see the surrounding beauty of the place we call Paris.

For more information on Paris click the link below