A magical moment in Monaco

Exploring Monte Carlo on any budget

I’m inside the Saint Nicholas Cathedral of Monte Carlo, in Monaco. It is a cavernous church with tall, white stone walls, arches, and pillars. Gold-plated murals line the domed ceiling. Stained glass windows portray biblical tales. Rows of maple brown pews are adorned with red velvet cushions. And the priest’s words are echoing off the walls, making it very hard for me to understand his French.

As I sit among friends in a row of pews and crane my neck to see the stunning bride and groom awaiting the moment they’ll embrace, I can’t help but to feel like I’m living in a fantasy. Most of the time when I am in a place like this, I’m simply passing through as a tourist. But today, I’m taking part in a modern personal celebration in a venue built in the 1800s.

It is here where the royal ceremonies of Monaco take place. Princess Grace and numerous members of the royal lineage are also interred in this very cathedral. But also, local citizens are married here year-round. And I’m here to see one of those weddings.

After the ceremony, the bride and groom make their dramatic exit. Pink and green tissue paper hearts are thrown into the air. More than 100 onlookers, both invitees and passersby, applaud as the blissful couple kisses one more time for all to see. 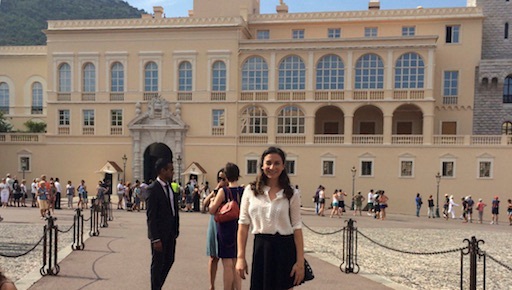 With the Mediterranean Sea glistening behind us, the scene is nothing short of magical.

Monaco is the second-smallest country in the world (Vatican City is No. 1), wedged inside the French Riviera with France and the Mediterranean Sea as its only borders. The district of Monte Carlo has been popular with the rich and famous for centuries as a place to spend big bucks on gambling and luxuries. But the city is not just for the upper class; anyone can come here to take in the ambiance and play royalty for the day.