Amsterdam is the capital of the Netherlands and it is the country’s largest city with its financial, cultural, and creative center. Amsterdam is known as Venice of the North, the city features lovely canals that network the city. Its impressive architecture and more than 1,500 bridges, a true travelers dream is here, whether you prefer culture and history, serious partying, or just the relaxing charm of an old European city.

It is one of the safest cities in the world where it has even called as a “female – friendly city that women can walk alone comfortably in the streets. Everyone speaks English as well as German and French. The Euro is the currency of the Netherlands.

The Anne Frank House is the wartime hiding place of the young Jewish girl and her family, finally caught by the Nazis, made famous by Anne Frank’s diaries. Not to be missed.

Begijnhof is one of the biggest and well known inner courts, and is an oasis of peace close to the bustling heart of the city. There is a doorway in the row of houses on the Spui that leads you there, it has a lovely English church (AD 1400) with pulpit panels designed by Mondriaan, and the oldest house in the city (1475), one of Amsterdam’s few surviving wooden houses. Turn left out of the Gedempte Begijnensloot entrance, and it leads you to the Amsterdam Historical Museum and its free gallery of old paintings of city guards in the style of the Nightwatch.

Heineken Brewery used to be a brewery until a few years ago, now a museum and visitors’ centre. No unaccompanied children, of course. No need for a reservation so beer lovers be sure to visit because a free beer is waiting for you.

Rijksmuseum is a large museum containing paintings by some of the Netherlands’ great 17th century painters such as Rembrandt, Vermeer and Van Hals. The Nightwatch by Rembrandt is their prize piece. Contains many artifacts as well as paintings.

Rembrandt’s House, the 17th century house where Rembrandt lived and worked, restored to its former state. Of particular interest is the ability to buy etches made from copies of Rembrandt’s original plates.

Dutch Cheese, the most common of which are Gouda and Edam. The jong (young) variety is mild and creamy, while the oud (old) is mature and has a sharper taste. It’s fair to say all Amsterdam cafés offer some sort of kaas broodje (cheese on a bread roll), and a common happy hour snack is a plate of Dutch cheese bites served with mustard. Goat cheese is also popular and often found on a tasty salad of mixed greens, walnuts and honey. Or buy hand-crafted farmer’s cheese at an Amsterdam market stand. 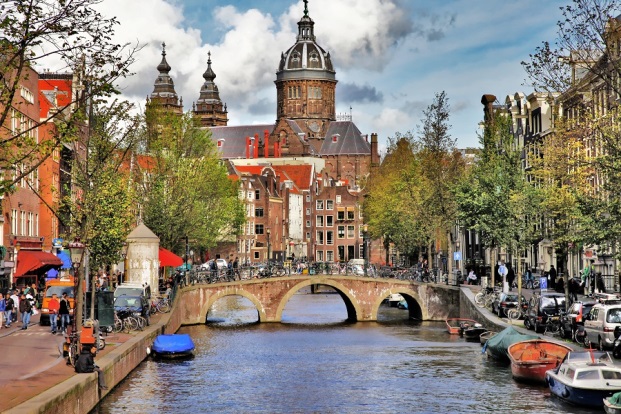 Heineken it tastes no better here. Try some of the other excellent beers you can get from this part of the world such as “witbeer” (white beer). Also check out bitterballen, a kind of fried meatball, and the kroketten (the same, but shaped like a cylinder). Last but not least, don’t forget to try a traditional herring or a broodje haring (herring sandwich), available from fish stalls around the city. Herring in Amsterdam is usually with served onions and pickles.

Amsterdam has all the advantages of a big city with its culture, history, food, entertainment, good transport and it is physically small, beautiful, relatively quiet, and largely thanks to the canals, has relatively little traffic. Watch out for the bicycles!