Fiji is located in the South Pacific approximately 4,450 km (2,775 mi) southwest of Honolulu and 1,770 km (1,100 mi) north of New Zealand. Flight time to Fiji is 10 hours from Los Angeles; four hours from Sydney; 3 hours from Auckland; and about six hours from Honolulu.

A lot of airlines that travel to New Zealand and Australia stop over in Fiji, as it’s the busiest stopover port of all the many surrounding South Pacific Islands. 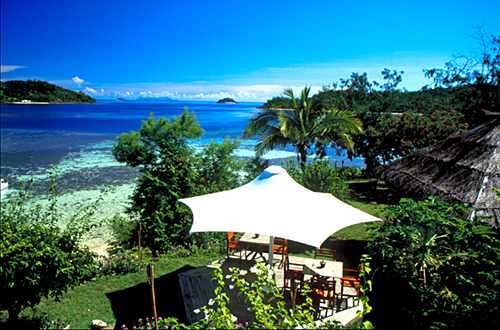 You must have a valid, ongoing or return airline ticket and your passport must be valid for six months beyond your intended stay. New Zealand and Australians don’t require visas, nor do visitors from most developed countries. However, be sure to check your country’s passport requirements well before arrival.

Fiji’s wet season is from November to April. Fiji has a mild average temperature of 25°C, however it can climb to 30+°C in summer from December until January, and then sink to 20°C in winter from July until August.

Best time to visit is the so-called Fijian winter or ‘dry season’, from May to October, with lower rainfall and humidity, milder temperatures and less risk of tropical cyclones. These 6 months make up the high season when airfare and accommodation costs are at their highest, peaking in June and July. In wet season it’s best to head to drier regions such as the Mamanuca and Yasawa island groups. December and January are busy, as they coincide with school holidays in Australia and New Zealand, and Fijians visiting relatives. November, February and March are low season, the best time to get deals on flights and accommodation.

Fiji provides some good shopping, in particular Nadi, Suva and Lautoka have plenty of gift shops. These range from duty free shops to cheap clothing and souvenirs.

Currency is the Fiji dollar. Notes are in denominations of F$1, F$2, F$5, F$10, F$20 and F$50. Traveller’s cheques can be cashed in any Fiji bank, most hotels, and duty-free shops. ATM machines are in all towns.

Tipping– Tipping is not customary but a bit of bargaining is acceptable.

Food – supermarket food is more expensive than in New Zealand and Australia, but cheaper than you’ll pay at the resort! If you are self-catering at a holiday home rental, buy fresh local produce from a local farmers market. These open every day except Sunday and provide an opportunity to buy local crafts, fresh fruit, vegetables, breads, local made meals, shells, beads, necklaces and clothing.

Communication – official languages are English, Fijian, and Hindustani, with English the most common.

Medical – Visitors do not need vaccinations, and there are private doctors and hospitals in the main towns.

Safety – no poisonous spiders, nothing to be scared of out the water. The ocean has sharks and a poisonous docile snake, but overall nothing to worry about.

Police – The police are relaxed and appear when you need them to help you, or resolve issues.

Land transport – Fiji’s larger islands have extensive and inexpensive bus networks, a great way to mix with the locals. There are bus stops but you can often just hail buses, especially in rural areas. About 90% of Fiji’s 5100km of roads are on Viti Levu and Vanua Levu. Both of these islands are fun to explore by car, 4WD or on motorcycles.

Of the 300+ islands and 522 smaller islets, approximately 106 are permanently inhabited. The largest island is Viti Levu, with the two biggest metropolitan areas – Suva, the capital city and Lautoka. The second largest island, Vanua Levu, is 64 km to the north of Viti Levu and the two main towns there are Labasa and Savusavu.

Other islands include Taveuni and Kadavu, the Mamanuca Group, and Yasawa Group, the Lomaiviti Group and the distant Lau Group, seldom visited by tourists. The only major town on any of the smaller islands is Fiji’s former capital Levuka, located on the island of Ovalau.