Llao Llao Hotel, designed by architect Alejandro Bustillo, was opened for the first time in 1938. Aﬅer a fire burnt the hotel down in 1939, it was reopened with is present structure in 1940. The Hotel is located in the center of the lake district, within the Nahuel Huapi National Park, in the heart of Argentine Patagonia, surrounded by Cerro López, Capilla and Tronador mountain peaks. It is only a two-hour flight from the City of Buenos Aires and 500 mts from Puerto Pañuelo, arrival from and departure to Cruce de los Lagos (Lake Crossing). 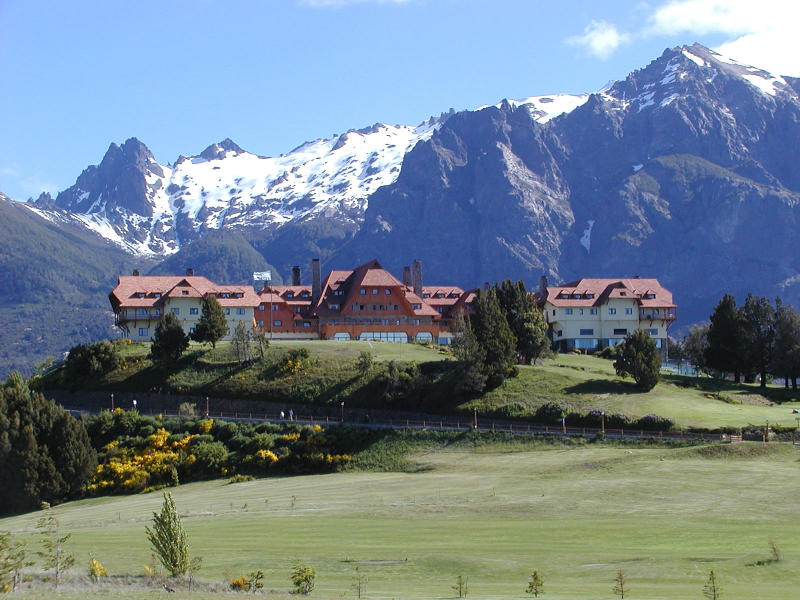 There is no place like this in the world , a true ecological paradise, with crystalline waters and pure air. In perfect balance with the stunning
natural environment of the region, it has become a must for the tourist visiting Argentina.

ROOMS
Bustillo Wing
Our signature building was opened in 1940 by Architect Alejandro Bustillo. The charm of its historical heritage is found in each of the
spaces in which the warmth of a mountain hotel, surrounded by lakes and stunning snowy peaks, blends with the service of a five-star resort,
member of The Leading Hotels of the World.
This wing has 162 rooms, 11 studios and 12 suites overlooking the Moreno and Nahuel Huapi lakes and the Cerro López mountain peak
and 1 cabin.
Lago Moreno Wing
The perfect blend of the classical Llao Llao style and modern Patagonian design. Built in 2007, it is connected to the Bustillo wing by a panoramic bridge. It has 43 new rooms: Deluxe studios and suites, with stunning views of Lake Moreno and Mt. Tronador. All the rooms have LCD TV, a terrace overlooking Moreno Lake, jacuzzi and air conditioning.

RATES INCLUDED
Buffet breakfast.
Happy Hour every evening.
Free use of Health Club & Fitness Center.
Recreational activities.
Nahuelito’s Kids Club (for kids from 3 to 12) with snack included.
Free daily transfers to Mt. Catedral during July and August.
Personalized assistance in our exclusive mountain lodge “Llao Llao”
at the base of Mt. Catedral during the months of July and August.