In a city already known for a lively arts scene, Minneapolis never stops showing the love. Year after year, the city continues its generous per capita support of civic culture, with several of its venerable theaters and art museums having undergone large expansions over the last few years. 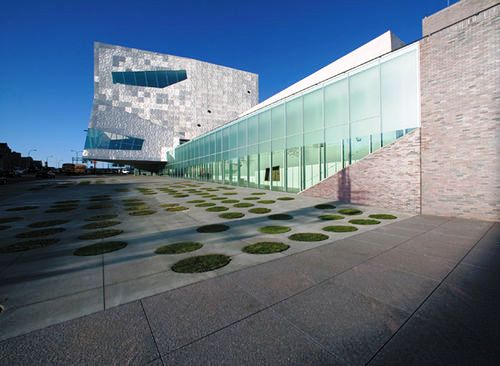 Mention Minneapolis theatre and the first name that springs to mind is the renowned Guthrie Theater. Acclaimed British theatrical director Sir Tyrone Guthrie founded the classical repertory company in 1963 in response to what he and others viewed as the commercialisation of Broadway. The Tony Award-winning theatre is a hallmark of the regional theatre movement and enjoys a nationwide reputation for artistic and technical excellence.

In 2006, the Guthrie made a major and controversial move from its original home next to the Walker Art Center to a $125 million (£80 million), 285,000-square-foot complex across town on the banks of the Mississippi River. Designed by architect Jean Nouvel, responsible for the highly unconventional Musée du quai Branly on the Left Bank in Paris, the new Guthrie features the same vibrant imagination, with a striking metal and glass exterior that evokes the silos and mills found along the Mississippi’s working waterfront.

Another Minneapolis art treasure is the Minneapolis Sculpture Garden, an 11-acre urban oasis next to the Walker Art Center and linked by a footbridge to lovely Loring Park. Dozens of modern-art sculptures fill the garden, including Coosje van Bruggen’s whimsical ‛Spoonbridge and Cherry’, a 50-foot spoon topped with a water-fountain cherry that has become a Minneapolis icon. Other works include Frank Gehry’s stunning ‛Standing Glass Fish’, along with pieces by notable sculptors from Henry Moore to Claes Oldenberg to Jenny Holzer. Next door, the Walker Art Center gleams with a 130,000-square-foot, $74 million (£47.5 million) addition by the Swiss firm Herzog & de Meuron.

This new showstopper features a mesh skin of perforated aluminium panels rising from the street in a chunky, angular shape. The addition nearby doubles the exhibit space and allows for more of the permanent collections to be shown. The Walker is often considered the best contemporary art museum between the coasts; its soaring, angled ceilings seem to draw you from one area to the next.