Getting to know Brazil’s second-largest city.

On Corcovado Mountain, the statue of Christ the Redeemer overlooks Rio de Janeiro, “the Marvelous City.” Choro beats pulsate along the coastline, as volleyballs fly over beach nets and the sweet smell of caramelized popcorn lingers around food carts. As Brazil’s second-largest city, this vivacious seaside spot is bursting with energy and is waiting for you to visit.

Tourist attractions
The Brazilian shoreline is a mecca for sun worshippers and beach babes. Copacabana Beach has a reputation for boasting one of the most scenic coastlines in the world, while the trendy Leblon and Ipanema beaches tie for second place. These vibrant beachfronts are scattered with bronzed “cariocas,” spontaneous dance parties, and fresh coconuts for sale.

Tourists also flock to Sugarloaf Mountain, or “Pao de Acucar.” This peak, which stands at the mouth of the Guanabara Bay and the Atlantic Ocean serves up epic views of the city. Some hop into the cable cars at Praca General Tiburcio to arrive at the summit in minutes, while the adventurous rock climb and clamber to the top. 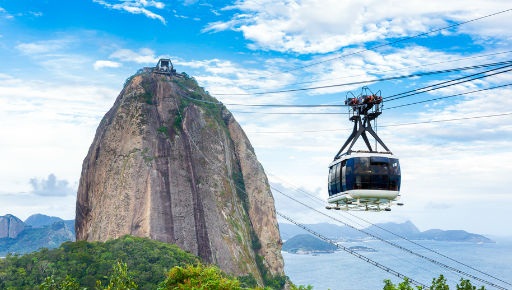 Cuisine
Meat lovers often chow down at churrascarias. Serving up Brazilian-style barbecue, these steakhouses pride themselves on quality meat and professional service. Pick the “prato feito,” which is a set meal with meat, rice, fries, and salad, or order “feijoada;” a stew with beans and meat.

Looking for some street eats? Follow the lure of churros to the food vendor clusters. Snack on some “pipoca,” a sweet and salty twist on traditional popcorn with condensed milk, cheese, and bacon toppings. Or go for the flaky, deep-fried pastries, “pasteis,” which are stuffed with meat and cheese. “Quiosques,”or food stands, are also scattered along the shore, where the locals rave about the fresh coconut water and fried shrimp.

Viewfinder tip: After a day at the beach, join the locals and watch the sunset from the seawall at Bar Urca.

Budgeting
Unfortunately Rio de Janeiro isn’t as cheap as many other South American cities. However, it’s still possible to travel around this Brazilian spot without breaking the bank. For starters, avoid booking a trip during New Year’s Eve and Carnival. Sure they’re the most colorful, festive times of the year, but they’re also the most expensive.

Brazil’s summer, which runs December through February, often sees more tourists and higher hotel rates. For fewer crowds and cheaper accommodations, consider a visit between April and June or September and October.

For everyday budgeting, street food can help cut costs, as will taking public transportation. Hop on the Rio subway system or the Frescao buses. At night, avoid walking and hail a taxi instead. Always ask the cab driver for the price of the fare before committing to a ride.

Safety
Much like when visiting any bustling city, keep your guard up and be aware. Don’t flash valuables, and avoid walking alone on empty streets, especially in the evenings. Some areas, such as “Aterro do Flamengo,” Flamingo Park, are picturesque, but dangerous, so it’s best to stay in a vehicle when exploring these areas. Also, when visiting popular attractions such as Christ the Redeemer, don’t get adventurous with alternative means of transportation—stick to the trains.

Rio de Janeiro is home to a number of “favelas,” or slums—some of which are safer than others. Before venturing into a favela or other destinations, speak with the hotel concierge or a tour guide for additional safety tips and advice.