Seeing the sights in Sydney on foot. Known for one of the most picturesque and largest natural harbors in the world, Sydney, Australia, attracts visitors from around the globe.

While people still like to put another “shrimp on the barbie” (I couldn’t resist), travel to Australia has come a long way since the days of Crocodile Dundee. But one thing is for sure: You’ll still enjoy good old Australian hospitality as you’re greeted with a “G’day Mate,” every morning.

We only had a couple of days to explore Sydney during a stopover after exploring Queensland’s tropical north. Booking a room at The Mantra 2 Bond Street Hotel, which is located in the heart of the city, put us within walking distance of all the major attractions. Once we laced up our walking shoes and slathered on our sunscreen, we set out for a tour that showcased the best of Sydney in a day.

From our hotel, we walked directly to the waterfront to check out the Sydney Harbour Bridge, the world’s tallest steel arch bridge. Built in 1932, the bridge is one of the most recognizable structures in the world. It’s an impressive sight to admire, but you must be sure to walk on it, as well. The pedestrian walkway takes you to the Pylon Lookout, where you can learn how the bridge was built at the turn of the 20th century and enjoy clear panoramic views of the city.

Viewfinder Tip: For the truly adventurous, try the Sydney Harbour Bridge Climb, during which you scale the bridge to a dizzying height of 440 feet.

Located at the foot of the Sydney Harbour Bridge, the oldest district in the city is known as The Rocks. Filled with cafés, restaurants, and shops, this neighborhood is a great spot to grab a meal or just hang out. Stone buildings that date to the last century preserve the heritage of the colonial district. There also are narrow passageways and historic plaques telling the history of the first English district in the city. Keep an eye out for the Nurses Walk, which honors those who took care of sick convicts who arrived in ships.

While the Harbour Bridge may be one of the most recognizable structures on Earth, the Sydney Opera House is definitely one of the most well-known buildings on the planet, rivaling famed landmarks such as the Eiffel Tower and the Taj Mahal. When we think of Australia, we instantly think of the opera house; it’s the landmark that is shown most often on news programs and documentaries about Australia. Admire the architecture, or, if you time it right, catch a performance or take a tour of its massive shell-like pods that look out over the beautiful Sydney Harbour.

The waterfront along this area is filled with more restaurants and eateries, and you can stop for lunch or ice cream and refill your water bottle before moving on with your walking tour. 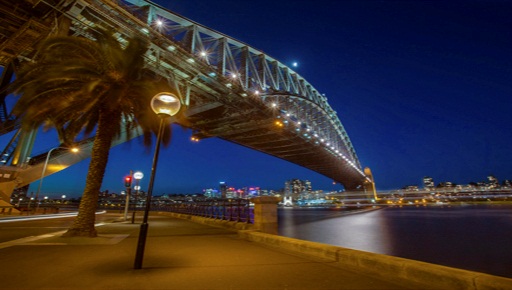 Under the Sydney Harbour Bridge

From the Opera House, it’s a nice stroll to the Royal Botanical Gardens. We’re not normally ones to enjoy walking through gardens, but the Sydney gardens are worth a closer look. This quiet oasis is filled with more than 17,000 tree and plant specimens from around the world. Admission is free and visiting is the perfect way to spend an afternoon strolling the many gardens, quiet ponds, picturesque buildings, and pavilions. The Royal Botanical Gardens also is a great spot for a picnic or even an afternoon nap! We loved the long seawall curving along the water to Mrs. Macquarie’s Chair, a promontory from which we snapped a sunset photo of the Sydney Opera House and Harbour Bridge lit up in a colorful display.

Walking back to our hotel through downtown, we made our way to Circular Quay, where restaurants line the waterfront. Here we decided to choose a romantic dining spot for the evening. There are many along the Quay and it took us forever to decide, but that was the entire point. The romance of walking arm-in-arm along one of the most beautiful waterfronts on Earth was something we wanted to savor and enjoy. We weren’t in Sydney for very long, but we were determined to make the most of what we had, and we did just that.